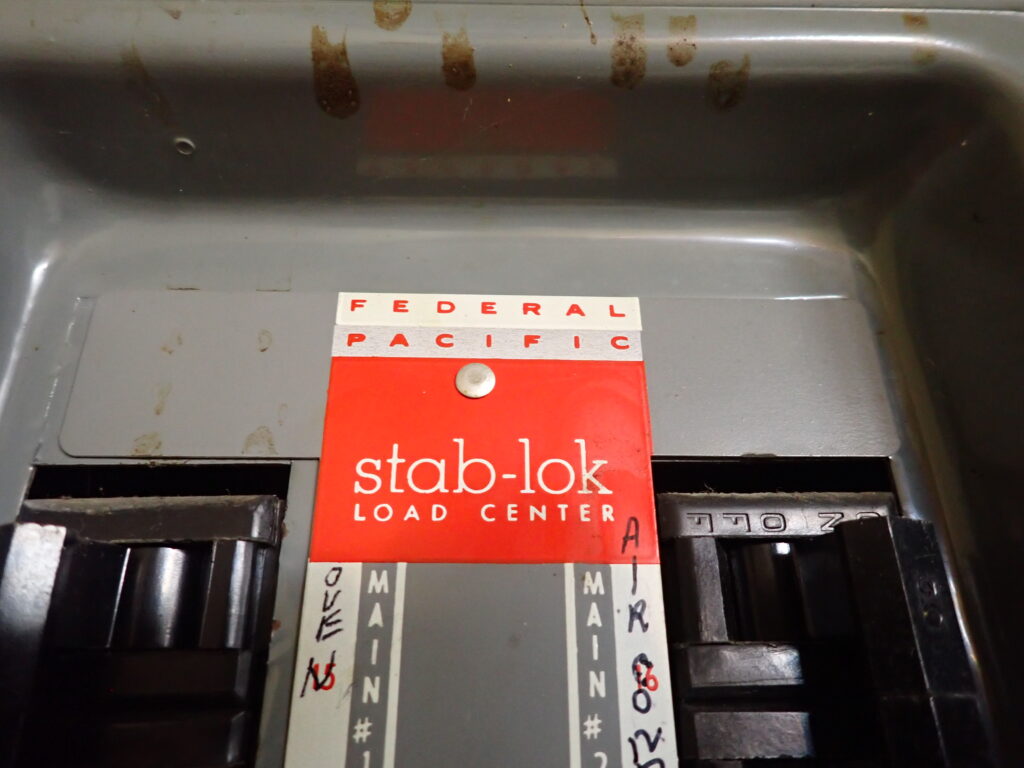 Federal Pacific Stab-Lok breaker panels are a fire hazard.  The double-pole breakers fail to trip a high percentage of the time when overloaded or in a short circuit situation.  The breakers also come loose on the buss bar.  In these instances, the breakers fail to protect the wires, they can overheat, arc, and lead to a fire.  From 1980 to 1983, The Consumer Product Safety Commission (CPSC) conducted laboratory tests on the double-pole FPE breakers and stated the double-pole breakers would fail 25% of the time under modest load.  The failed breaker would then never trip again after that under any overload condition.  Federal Pacific never refuted CPSC’s findings and acknowledged the problem with the double-pole breakers failing to trip.  Back in the 1980’s, there were tests conducted by 4 companies and 1 Federal Agency: FPE, Southwest Research Inc., UL, CPSC, and Wright-Malta Corp.  Only 2 of these studies were made public due to proprietary and liability issues.  25 years later, J.Aronstein, P.E. has continued independently testing.  In J.Aronstein’s testing which was the largest sampling nearing 500 circuit breakers, the failure rate was as high as 60%.

Identifying if your home has an FPE Stab-Lok panel is easy.  First, the panel will have “Federal Pacific Stab-Lok” on a sticker either on the inside or outside of the door.  Second, the breakers will be bright orange.  Below is a picture of a Stab-Lok panel.

In addition to automatically recommending the panel be replaced due to the high failure rate of the double-pole breakers, there are 2 defects that I inspect for closely with these panel types.  The first is to see if there are any burnt wires.  I look for blackened lugs, melted breakers, melted sheathing, or burnt wiring.  I’ve found numerous instances where wires running from the Stab-lok breakers were burnt.  In the last 6 months alone, I’ve come across 2 panels where the service entrance cables had become so hot that the sheathing about 2”-3” up from the main lugs had melted.  The sheathing was blackened and bubbled.  The licensed Electrician who was called out on the first one informed me that the house could have easily burnt down if I hadn’t caught it.  The second item I look for is to see if any of the breakers are loose.  Most times, there are at least 2-3 breakers loose.  I’ve had some panels where almost all of the breakers were loose.  All of these situations are fire hazards.

Yes, there are companies that manufacture replacement breakers to fit into the FPE Stab-Lok slots.  The cost is around $30-$40 per breaker.  Because you can’t predict when the breakers will fail, it’s best from a safety standpoint to upgrade the entire panel.  Do not only replace a few breakers.  This still leaves you and your family with a potential fire hazard.

If your home has a Federal Pacific Stab-Lok main panel or sub-box installed, then please contact a licensed Electrician to have it replaced.  The panel may have been there for 30 years and seem to work fine, however, the underlying problems are there and it’s simply not worth the risk.

More Technical Information To read more detailed and technical information regarding Federal Pacific Stab-Lok panels, please click on the pdf file from CPSC’s March 18, 2008 Meeting where the subject was: “Federal Pacific Stab-Lok circuit breakers and associated safety hazards.”  Daniel Friedman’s InspectAPedia website also has a slew of useful information and can be found at www.InspectAPedia.com/fpe/fpepanel.htm.