When homeowners have their roofs replaced, many expect a new roof to last at least the length of the manufacturer’s warranty. If the homeowner chooses the 35-yr asphalt composite architectural shingle, then common sense figures that the roof should last outwards of 35 years before needing to be replaced. That’s assuming there’s no Act of God (ie-hail) that totals the roof somewhere in between now and 35 years. If a homeowner ends up with defective shingles installed on their roof, the estimated remaining useful life plummets significantly and can turn into a costly nightmare. This article will explain and document some common manufacturer’s defects that I’ve regularly found during my home inspections in the Omaha Metro.

In 2001-2002, thousands of Omaha roofs were replaced due to the major hailstorm that blew through. Now, after more than 8 years, a 25-year life asphalt composite 3-tab shingled roof covering should look like it’s almost brand new. Instead, a lot of these roofs look like a machine gun hit them on the east and south face. The shingles have major granule loss in chunks, the shingles have significantly cupped up on the tabs, and in the valleys or down by the eaves, there may even be holes developed all the way through the backing. The shingles appear to be 20-30 years old and heavily wore out. On the north and west face, the shingles at first glance appear to be in pretty good shape. Run your hand across the surface or eye across the roof deck and you’ll notice every shingle is cupping. It’s nowhere near as bad as the east and south face, but it’s deteriorating too. The ugly truth for many of these roofs is they need to be replaced. 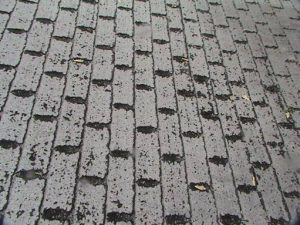 This roof was approximately 8 years old in Herman, NE. It faced south and had a 3/12 pitch.

During the rush to fill orders, the manufacturer had too much moisture in the mix. When the local Roofing Contractors would open the bundles, I was told they saw steam roll out. Unfortunately, many roof contractors didn’t realize there was a problem and these defective shingles were installed throughout the Omaha Metro. 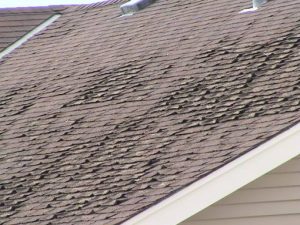 This roof was located near I-370 & 132nd in Omaha, NE. You can obviously see the cupping, curling, and granule loss on the backside of this roof. The front side, however, appeared to be in near perfect shape. This roof has an organic backing.

This manufacturers’ defect is sometimes difficult to notice. It occurs because there’s too much tar in the mix. On the hot summer days when the sun is blazing down onto the roof, the tar will bubble and lift the granules. The shingles look like they have a bad case of acne. Eventually, the granules will become loose and fall off leaving what appears to be a hail damaged roof to the untrained eye. The blistering will occur most on the sides where the sun beats down on the roof. The extent of the damage will depend on how many bad bundles of shingles were applied to that roof. If there was only 1 bad bundle of shingles, you’ll only see 1 row or diagonal run of blistering. If the entire truckload of bundles were defective, then over time you will see blistering across the entire south and east face and possibly on the other 2 sides as well, but not as heavy.

As I stumbled upon blistering during my home inspections pretty regularly, I was amazed afterwards at most of the responses of licensed Roofing Contractors. Most would claim they didn’t see anything and that there was nothing wrong. The ones that didn’t see anything simply didn’t bother to get up on the roof to look. The rest were hanging their liability and reputation on the manufacturer’s stance. Some manufacturers claim blistering is only cosmetic and that it doesn’t actually reduce the life expectancy of the shingles. After seeing blistering on numerous roofs throughout the Omaha Metro and the resulting granule loss, I know this is more than cosmetic. Blistering does decrease the life expectancy of the shingles. Sometimes, the blistering and resulting granule loss is so heavy that a new roof covering is recommended. The photos below support my stance. 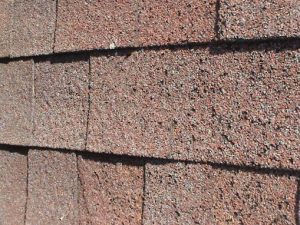 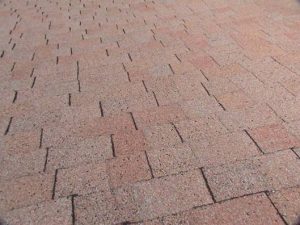 This is the same roof as the close-up photo above. The entire south face of this roof had blistering so bad that it looked like pee size hail had peppered the roof.

What Are The Homeowner’s Options If They Are Selling The Home?

If the manufacturer’s defect is found during the Buyer’s inspection, the homeowner can become caught between a rock and hard place. Most of the time, the Buyer’s home inspection is the first instance where the homeowner becomes aware of the problem. They are under a tight deadline to respond back to the Buyer as to what they will do. They Homeowner can:

My Advice To Sellers: Please have your home pre-inspected to eliminate these nightmares.

With roofs that were installed back in 2001-2002, I’m not aware of any recent manufacturer claims where labor was included in the payout. As labor is the biggest factor in the price of a new roof, this is a major blow to the homeowner. To “help” matters, the manufacturer also pro-rated the life of the shingles. One Seller was given estimates of around $7,000 to replace his roof and the manufacturer cut him a check for just over $900. That hurt!

Once a manufacturer’s defect is found, the homeowner needs to find out who the manufacturer is, and get the ball rolling. The best way to do this is to contact the Builder (if it’s a newer home) or reach out to the Roofing Contractor who installed the roof and obtain the manufacturer’s info. They should have details of the installation such as type of shingles installed, manufacturer’s warranty of those shingles, and have the manufacturer’s contact info. If you’re lucky enough to have an extra bundle of shingles lying around, just look on the packaging. A qualified Roofing Contractor may be able to look at the shingles and help you determine the manufacturer also. Once you know the manufacturer, then go to their website and research how to file a claim. CertainTeed had a very helpful website that provided the actual warranty for each year and type of shingles made at www.ctroof.com. Tamko’s limited warranty information was also easy to find by going to their home page at www.tamko.com and selecting “Homeowners.” The “Limited Warranty” link was on the left navigation bar.

From 1987-2005, CertainTeed manufactured some of their shingles with organic backing. After 2005, CertainTeed switched to manufacturing all of their shingles with a fiberglass backing. The shingles with the organic backing are the focus of the class action lawsuit. The website www.certainteedshinglesettlement.com lists out the date ranges covered by the settlement for each specific type of shingle they manufactured with the organic backing. The site walks you through how to determine if you have these shingles covered in the settlement, how to determine if you are eligible to be a member of the Settlement Class, how to file a claim, provides a summary of the Settlement Agreement, and important links for Class Members.

With the sheer cloud that raced through Omaha with wind speeds of 115 mph in 2008 that resulted in more homeowners claims being filed than for Hurricane Katrina, a shortage of roof supplies, and a backlog of roof replacement orders, time will tell if and how many manufacturers’ defects will surface in the next 10 years. The caliber of roofing contractors that rolled into the area from out-of-state and their resulting sub-par quality of work will also complicate matters for hundreds of homeowners. For instance, I had 1 roof where the gable edge wasn’t nailed within 1’ of the edge. I could literally lift 10 rows of shingles with my hands at the same time. There were numerous others where the Roofing Contractors installed shingles over sagging & rotted roof decks. There were countless roofs where the art of flashing was never understood or implemented. Ice dam material is required by code. There were way too many roofs installed without the ice dam membrane, which in turn indicates that proper permits were never pulled.

Protect Your Investment With An Inspection

Each roof is a system and different factors weigh on longevity of the roof covering. To determine if your roof has any manufacturer’s defects, wear-n-tear defects, evidence of hail damage, inadequate attic ventilation, installation errors, etc, it’s best to hire a quality licensed Roofing Contractor or ASHI Certified Home Inspector to look your roof over. If you’re planning on selling your home in the near future, the home inspector can not only surface roof issues, but other potentially high dollar or safety issues related to the rest of your home. The inspection can alert you to minor preventative maintenance items that could save you thousands later. 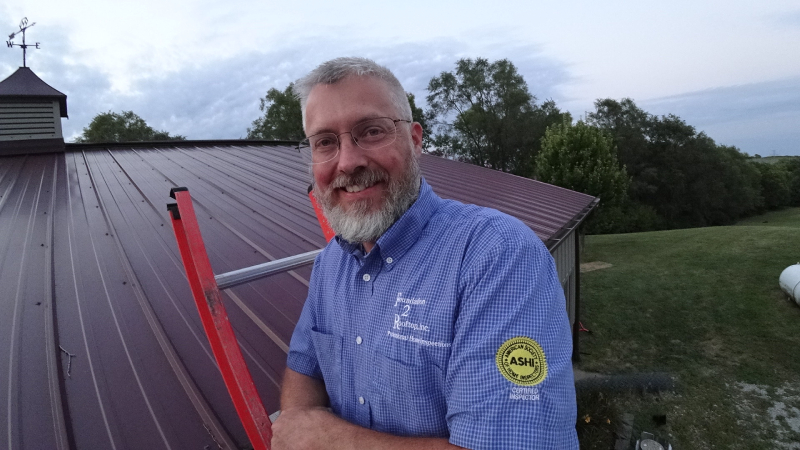