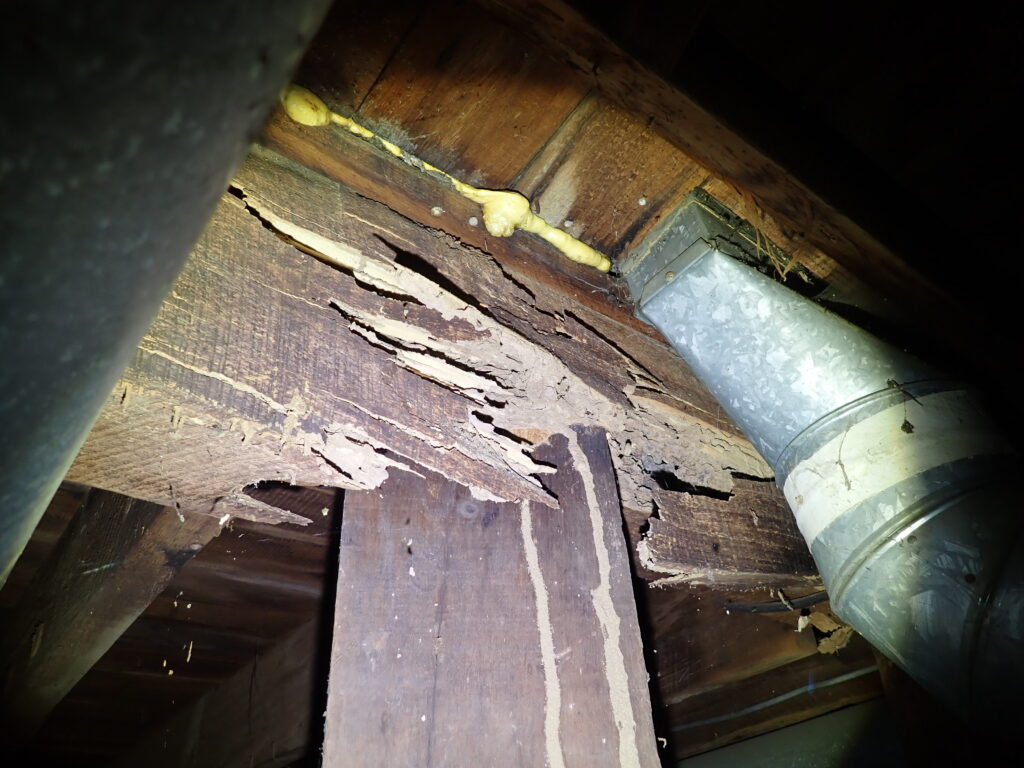 Termite damage found on Home Inspection: Recently, I had the pleasure of inspecting an 1890’s farmhouse in the Omaha area where the the main floor and second floor had noticeably dropped. The doors wouldn’t shut. There were serious structure cracks in the lathe-n-plaster on the 2nd floor. Using a laser level, just outside of the bathroom, the small hallway dropped 2″ in just 2′. The living room dropped 3″ across 10′. On an old house like this, the floors are very rarely level. But when they are this significantly off, I always enjoy exploring the structure to determine the cause. This house did not disappoint!

How Does Termite Damage Occur?

Basic explanation: In the Omaha area, we have subterranean termites. That means they do not have wings and fly. They start at the ground and work there way up. The termite tubes are used to keep them moist while they transport wood from their food source back down to their underground nest. They need moisture, darkness, and a food source to survive. Before you try to wrap your head around any termite damage, you need to understand them. Below is a more in-depth look:

Subterranean Termites can be found in almost every state of the US, Mexico, and parts of Canada.  The National Pest Management Association has divided the US into 4 regions of which Nebraska lies in the 2nd most infested region.  According to the National Pest Management Association, over 2 million homes in the US will require treatment this year alone!

Habits:  A Subterranean Termite colony is extremely large.  It consists of the queen, king, winged reproductive swarmers, soldiers, and workers.  The workers are what you will most likely see if you ever break a live mud tube.  The workers are small, creamy white, and the most numerous.  They cause all of the termite damage.  The workers are constantly carrying food back to the colony, which is usually found in the soil beneath or in the immediate vicinity of the infested property.  Termites always start from the bottom and work up.  If you see them on the higher floors of your home, know they have already infested the areas below.  Subterranean termites need dark moist areas to survive.  That is why they form mud tubes to travel in along non-food areas such as concrete and metal.  If they ever break through the wood or drywall, they will fill in the void with mud to keep the tunnel moist and dark.  According to the National Pest Management Association, termites do more damage than fires, storms, and earthquakes combined!

Inspections:  A professionally trained termite inspector should always be hired to perform the pest inspection.  Infestation in the Omaha and surrounding area isn’t a matter of if, it’s a matter of when.  All homes in our region will be infested with termites at some point in their structural life.  Some homes will be infested more than once.  The longer infestation is left untreated, the greater the chances that structural damage will occur.  If evidence of termites is found on a property, the property should be treated.  This holds true for evidence of live termite tubes or inactive tubes.  The reason treatment is recommended regardless is inactive tubes simply means the termites have moved on to another part of the structure.  A professional termite inspector has a trained eye and may find evidence of termites when no one else can.  Most quality home inspectors will be the first to admit they don’t inspect for termites, but if they see signs of them they will point them out.  To find a reputable termite company, contact The Nebraska Pest Management Association at 402-476-1528.

Treatments: Termite treatments performed prior to March of 2000 were designed to create a repellent termiticide barrier below a home to keep termites from entering. This was done by drilling the floor along all walls of the bottom floor of the structure and then injecting the termiticide to under the floor. The soil against the exterior perimeter of the home and inside the hollow foundation voids was also treated. This repellent barrier was never perfect, thus there were sometimes frequent re-infestations. You may recognize some of these past treatments by the patched drill holes.

Termidor Termiticide was introduced in March of 2000. The application methods for Termidor were the same however it did not repel the termites. Instead, termites continued to travel through the termiticide between the home and the ground where they nest. In so doing, they picked up Termidor on their bodies and in their mouths. While feeding the rest of the colony, they spread Termidor through-out the colony. This caused the elimination of the colony within 1 to 3 months. Termidor worked every time, as long as the labeled directions were followed.

Through ongoing studies by universities throughout the United States and the manufacturer, a new method was developed. It was determined that control could be achieved by less invasive methods. Beginning in December of 2004 a method called ‘Perimeter Plus’ was approved for use. Treatment with Termidor may now be done by treating the soil around the entire exterior perimeter of the home and any infested areas. There are sometimes other details needing attention as can be determined by a professional. Termite treatments using the Perimeter Plus method will work nearly every time as long as full labeled amounts and percentages are applied.  Note: liquid treatments are not ideal around lakes, rivers, or high water sheds.  There are special bait treatments used in these areas to avoid contaminating the water.

Cost:  Termite treatment estimates will range from house to house.  Cost is calculated based on the lineal feet of wall that is to be treated, not on the square footage of the home.  The termite company will have to determine how many gallons of liquid treatment are needed on a per house basis.  Beware of unusually low bids!  There are companies in Omaha that are pumping in only half of the recommended amounts of treatment and are not stopping the infestation.

Many thanks to Steve Earl from Lien Termite & Pest Control for providing the informational brochures and sharing his invaluable knowledge for this article!  He can be reached at 402-397-8884.